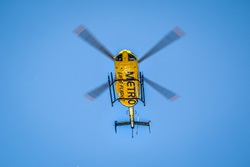 To ensure safe operations of the helicopter in and around helipads and other designated landing areas, Metro Life Flight utilizes the safety precautions below. These are the minimum required; additional safety procedures should be implemented, as required by participating hospitals.

Only approach the helicopter when instructed by a pilot.

Be careful of the airspeed probes (pitot tubes) on the front of the helicopter. They are sharp and may be very hot and can cause severe burns.

Keep your head down when passing under the blades.

Approach and depart the helicopter from the side (90 degree angle from the front). This will give the pilot the best view of your movements.