Pete Soto - Can’t Was Never Part of the Plan

Faces of Resilience celebrates the courage and conviction of 14 people who, in their most fragile state, received care at MetroHealth. 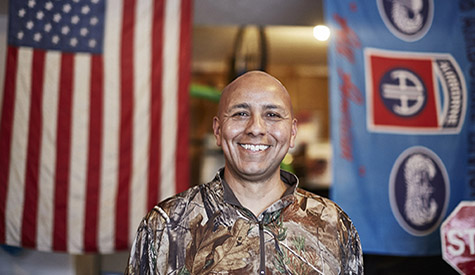 His response during his two years of outpatient physical therapy was very matter-of-fact.

And, he was right. He may move a bit slower and more deliberately, but there’s very little Pete can’t do. But it was a long road to get here.

On October 12, 2010, Officer Soto was on duty in Avon, Ohio, when the driver of a Ford F-150 pickup truck pulled out of a driveway in front of him on Route 83. Pete’s motorcycle slammed into the side of the truck. He separated from his bike.   His hip caught one of the tires, flipping him under the F-150, which tipped up and landed on him, crushing his pelvis. He could feel his tibia pressing against his riding boots. His head, however, never even hit the ground. 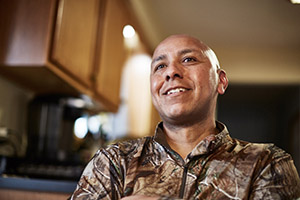 Having served in the U.S. Army with the 82nd Airborne Division, Pete knew how to take a fall. A former medic, he also knew the importance of keeping himself from going into shock. He never lost consciousness. Instead, he focused. He called in his accident and attempted unsuccessfully to call his wife.

There are certain risks that the wife of a police officer comes to accept, but that didn’t stop Linda Soto from trying to delay whatever news would greet her when she heard the sounds coming from a police radio in the hallway of her office. She wanted just a few more seconds before one of Pete’s colleagues said something that would change her world.

With a 5 percent chance of survival, Pete was given the last rites. He was kept in a medically-induced coma for two weeks. He spent two months in the hospital. Linda rarely left his side.

Pete lost three inches of his femur; it was simply sheared off at the top. Surgeons reconstructed his pelvis like a jigsaw puzzle, matching the pieces together as best they could and attaching them to a plate. Orthopaedic surgeon Heather Vallier, MD, uses this injury – Pete’s injury – as an example of the worst pelvis injury the team at MetroHealth has treated.

Pete couldn’t bear any weight for six months after his accident.  He couldn’t get out of bed on his own. He used a wheelchair and slowly achieved a series of milestones – standing, walking, using the steps in his home.  Permanent nerve damage cost him the ability to flex his foot. To prevent his toe from dragging, he wears a brace. He walks with a limp.

He’s had 13 surgeries in all – two of which happened nearly seven months after the accident, when surgeons could finally address his detached bicep and blown rotator cuff.  He’s not really able to raise his left arm over his head. At some point, he’ll need reconstructive surgery for his shoulder. 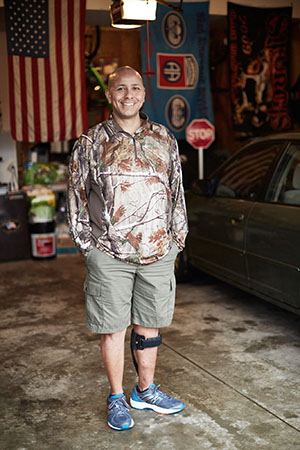 Eight months after hip reconstruction, Pete finished a sprint triathlon, swimming 750 meters, biking 20 kilometers and walking (instead of running) the last five kilometers. Always a runner, Pete had been training for a marathon at the time of the accident. His wife, one of his three children and four of his physical therapists joined him for the endurance event – which, he admits, he may have done a bit too soon. But, this stubborn, former SWAT team and undercover narcotics officer isn’t one to back down from a challenge.

Pete continues to push his limits, within reason – saying “no” to skydiving, but “yes” to zip lining, and riding a three-wheeled Can-Am Spyder motorcycle with a hand-shifter instead of a two-wheeled motorcycle with a foot shifter. He continues to enjoy the outdoors, camping and deer hunting with lifelong friends – switching from a left-handed to a right-handed bow and lowering his draw to 55 pounds.

With just under 20 years of service as an officer, Pete retired early because of his injuries. He began volunteering for MetroHealth’s Trauma Survivors Network as soon as the program was established. He visits the trauma unit on Tuesdays. And in April 2018 he started a new position as a first-time grandpa.

Faces of Resilience celebrates the courage and conviction of 14 people who, in their most fragile state, received care at MetroHealth.

They are children and adults who received a second chance at life in the John A. Gannon Burn and Trauma Center and Comprehensive Burn Care Center.

A gift to the MetroHealth Fund will help continue that care. Please consider a donation that will allow others the chance to become resilient survivors.