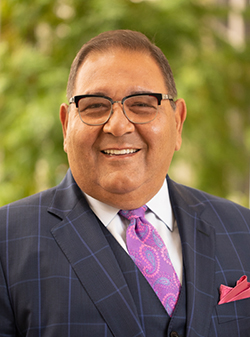 From the moment he arrived in Cleveland, Akram Boutros’ visionary thinking has inspired MetroHealth to elevate medical care by providing and integrating social services to build equity, promote justice and improve the health of people and the communities they live in.

With the 2019 creation of the Institute for H.O.P.E.™ (Health, Opportunity, Partnership and Empowerment), MetroHealth is connecting patients and neighbors to fresh food, stable housing, education, career training and other services that keep them healthy.

Dr. Boutros paired that work with a $1 billion reimagination of the system’s main campus on West 25th Street. The new MetroHealth Glick Center, which opens in October 2022 and will be the first hospital in a park in the country, has sparked the rebirth of the surrounding neighborhood while preserving its Hispanic culture.

Just as important has been Dr. Boutros’ focus on inclusion, diversity and equity. In 2020, 39% of MetroHealth’s new hires were racially or ethnically diverse.

Under his leadership, MetroHealth has grown to more than 20 community health centers, four hospitals, five MetroExpressCare locations and 10 pharmacies. Those are in addition to MetroHealth’s main-campus medical center, which is home to the area’s most experienced Level I Adult Trauma Center, Ohio's only Ebola Treatment Center and the only adult and pediatric trauma and burn center in the state.

During his tenure MetroHealth’s annual revenue grew from $785 million to more than $1.5 billion. MetroHealth now treats more than 300,000 patients at more than 1.4 million visits a year. Since 2013, the health system has created more than 1,800 new jobs, sent doctors into more than a dozen local schools and received the largest donation in its history – $42 million from JoAnn and Bob Glick.

In 2020, MetroHealth returned $191 million to Cuyahoga County in free care and community benefit programs, nearly two times the national average.
Dr. Boutros’ collaborative spirit has led to dozens of partnerships, including working with the Cleveland public schools to open what is believed to be the only high school inside a hospital. Its first class of seniors graduated in June 2019. Every senior – that year and the next – was accepted into college.

An internist with a 30-year record of successful hospital leadership at academic medical centers, community hospitals and specialty hospitals, Dr. Boutros cultivates personal relationships throughout the health system and the community along with an atmosphere of personal excellence for everyone he works with.

He serves on numerous nonprofit boards and is the recipient of dozens of awards, including the 2019 Humanitarian Award from The Diversity Center of Northeast Ohio.

His community service includes serving on the boards of:

He also serves as:

Some of his recent awards include being named: