The Generations Society honors individuals who have made plans to support MetroHealth beyond their lifetime. Membership signifies that you have named MetroHealth in a bequest or trust, a life income gift (such as a charitable remainder trust or gift annuity), a beneficiary of life insurance, pension plan, or IRA, or other form of deferred gift.

Find out about ways you can support MetroHealth as an employee. 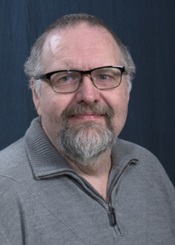 In late 2017, employee Keith Hagans made a gift to MetroHealth – the first step toward paying back a medical bill that he couldn’t afford. In his will, he has named MetroHealth a beneficiary; $500,000 from his estate will go to the Brain Injury Patient Care, Education and Research Fund at MetroHealth.

Keith is Director of Data Operations for Better Health Partnership, a health care collaborative based at MetroHealth. He says the gift is a tribute to all the doctors and nurses in the Brain Injury Rehabilitation Program who were part of his care – but especially to James Begley, MD, director of that program and director of MetroHealth’s Inpatient Rehabilitation.

In 1995, Keith had a serious fall at his house, suffering massive head trauma. Flown by Life Flight to MetroHealth, he was hospitalized for two months there, including six weeks in a coma.

Keith eventually recovered but didn’t have health insurance and couldn’t pay his bill, which was hundreds of thousands of dollars. And that always bothered him.

Before the accident, he worked in logging as a lumber inspector. An entry-level keyboarding class he took to help strengthen his hand-eye coordination led to an associate’s degree in computer service with network technology.

The work experience brought Keith back to MetroHealth, first as a contractor, then, in 2000, as a full-time employee providing computer support. Over the years, he moved into roles as an engineer and systems analyst in radiation oncology. In 2005, he earned a bachelor’s degree in computer science. In 2015, Keith finished his MBA, helped along by tuition reimbursement from MetroHealth.

In a strange way, Keith says, his traumatic injury turned out to be a blessing. He volunteers with the Trauma Survivors Network and participates in brain injury conferences and brain injury support groups.

“MetroHealth has done so much for me,” he says. “Everybody has been so involved in my care (including later bariatric surgery), my education, and not just giving me a job, but taking care of my career path. That’s worth a lot.”

In March 2017 Keith’s wife of 18 years, Mary Ann, died of a rare and aggressive form of cancer. “This is something Mary Ann and I built,” he says of the estate gift, which he hopes will grow in value.

Dr. Holly Perzy, Vice President, Care Delivery and Chief Executive Director of Skyway Health Solutions, and her husband, John Dorner, have pledged a $250,000 challenge for the MetroHealth Brecksville Health and Surgery Center. The couple, who live in Strongsville, have named MetroHealth a beneficiary in their will.

This gift is the second estate gift from Dr. Perzy; she and Mr. Dorner pledged $500,000 in 2015, a few weeks before the groundbreaking for the MetroHealth Brecksville Health and Surgery Center. In addition to their estate gift, they hope the challenge, which is designed to raise an additional $250,000 in matching philanthropic support from the community for health and wellness programming, will inspire the community to participate.

To recognize the gift from Mr. Dorner, a field service engineer, and Dr. Perzy, the MetroHealth Brecksville Health and Surgery Center atrium will be renamed the Perzy Family Atrium.

The name is in honor of Dr. Perzy’s parents, Fred and Vivian Perzy, and the Perzy family. Her great grandparents once owned and operated a family farm on land in Broadview Heights just east of Interstate 77. The land abuts the site of the Brecksville Health and Surgery Center, which opened in August 2016.

Seeing the depth of her father’s longtime relationships with Brecksville High School classmates he graduated with in 1956 helped Dr. Perzy focus on community health and wellness for this challenge.

In addition to opening her combined internal medicine and pediatrics practice in Strongsville in 1994, she was instrumental in the design of the MetroHealth Middleburg Heights November Family Health Center in 2013, where she also still sees patients.

A major gift from the November family, and conversations with fellow MetroHealth physician and mentor Dr. Alfred F. Connors Jr., started Dr. Perzy thinking about her own philanthropic activity. “I started to think, ‘What can I leave behind as a legacy?’ ” she says. “How do you include something that’s meaningful?”

Dr. Perzy says she drew inspiration from Dr. Connors as she helped plan the structure of her family’s gift. The two have worked together since the late 1980s, when she was an intern and he was director of the Medical Intensive Care Unit (MICU). Dr. Connors and his wife, Dr. Mildred Lam, recently made a leadership gift, the largest individual gift in MetroHealth’s history, to the MetroHealth Transformation.

In August 2016, at the grand opening reception of the MetroHealth Brecksville Health and Surgery Center, Dr. Perzy surprised her parents and brother, Dr. F. Todd Perzy, by announcing to the assembled guests that the family would be making a substantial gift.

“The most important thing is to make a difference, and that it has meaning,” she says. “I want to have something there that fulfills a need and improves the lives of our patients. And I want for it to outlast us all.”

After graduating from medical school at the University of North Carolina School of Medicine, Craig Bates, MD, headed to MetroHealth in 2001 for a residency in emergency medicine.

For years Dr. Bates, medical director of Metro Life Flight since 2008 and an attending physician in the department of Emergency Medicine since 2004, chose an automatic payroll deduction as his way of giving to the Employee Giving Campaign.

In 2015, prompted by multiple events including family illness and the death of a close friend, Dr. Bates and his wife, Kim, a veterinarian, started thinking about the legacy they wanted to leave behind.

The Avon Lake couple didn’t have a will, so they decided to draw one up.

“We said, ‘Let’s make a list of the places we care about,’ ” he said. MetroHealth was on that list.

To find out how he could designate a gift in his will to the hospital, Dr. Bates turned to The MetroHealth Foundation.

“It was pretty easy to do a bequest,” he says. “It was just a one-page thing.”

Dr. Bates and his wife have designated that the bequest be used for the area of greatest need.

“Donations to MetroHealth make a difference to the community we care for and the caregivers who deliver that care," he says. "Ultimately what matters most when considering donating to an organization is knowing it will matter … and that is definitely the case at MetroHealth.”