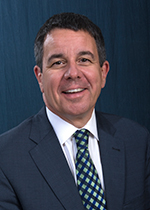 Dr. Alexander was promoted to Associate Professor at Case Western Reserve University in 2011. She is board certified in Family Medicine, and was recertified in 2009.
She completed the Advisory Board Leadership Series in 2011 and the Academy Fellowship Development of Senior Leaders Program sponsored by the Advisory Board and The MetroHealth System in 2013. Dr. Alexander is active in numerous national family medicine organizations.

She currently is co-principal investigator on the MEDTAPP Healthcare Access Initiative Grant which began in July 2012 and provides $2.9 million dollars of support from the State of Ohio to improve healthcare access, increase quality of care and decrease cost of care for Medicaid patients while training, recruiting and retaining providers who wish to serve an urban population. She also has initiated the MetroHealth School-Based Healthcare Program and successfully obtained private foundation funding for a pilot project for the program at Mound Elementary STEM School. Currently this program is targeted to expand to 20 school sites under Dr. Alexander’s leadership.

Dr. Bates received his medical degree from the University of North Carolina at Chapel Hill.

Dr. Richard J. Blinkhorn was appointed Chair of the Department of Medicine at MetroHealth in May 2019. In this role, he is responsible for the oversight of the department’s 11 divisions, research programs and graduate and post-graduate training programs.

Dr. Blinkhorn earned his medical degree from the Bowman Gray (Wake Forest University) School of Medicine and his bachelor’s degree in chemistry from Davidson College. He has been awarded several teaching honors throughout his career, and he has co-authored articles that have appeared in dozens of journals and textbooks.

Shari Bolen, MD, MPH, was named as Founding Director of The MetroHealth System Population Health Research Institute (PHRI), on January 2, 2020. Dr. Bolen will leads and develops new interdisciplinary research programs – paving the future for medical research, education, clinical care, and community health. The component Centers of the Institute include the Center for Healthcare Research and Policy (CHRP), the Center for Reducing Health Disparities and the Center for Clinical Informatics Research and Education. Dr. Bolen also serves as the Director of CHRP.

As Director of the PHRI, Dr. Bolen creates a highly collaborative environment that shares best practices and generates opportunities for continued growth of the Institute and its component Centers and ultimately, the entire research enterprise at MetroHealth. She plays a key role in driving the planning, implementation and delivery of data analytics and outcomes research around population health and care management programs and initiatives.

Dr. Bolen collaborates with the MetroHealth Population Health Innovation Institute and the Institute for H.O.P.E. to advance our understanding of social determinants of health and inform and contribute to the development of effective interventions. Above all, Dr. Bolen helps MetroHealth adapt and thrive in an evolving health care industry and inspire the organization to deliver on its vision of being the “most admired public health system in the nation, renowned for our innovation, outcomes, service and financial strength.”

Christopher Brandt, MD, has served as Chair of the Department of Surgery since September 2011. He also serves as Associate Director of the MetroHealth Comprehensive Burn Care Center. Dr. Brandt has been Board Certified in Surgery since 1989 and joined MetroHealth that same year.

Dr. Brandt is an accomplished teacher, winning numerous awards from the Case School of Medicine and other institutions. He has served the surgical community through roles in multiple, national organizations. He is currently active in the Association of Surgical Education where he serves on the Executive Committee, is chair of the Program Committee and is Section Editor of the Surgical Educator’s Manual. He has also served as an Associate Examiner for the American Board of Surgery. Dr. Brandt is highly involved in the Central Surgical Association, the Cleveland Surgical Society, the Midwest Surgical Association, the Eastern Great Lakes Burn Study Group, the National Board of Medical Examiners and the Society of American Gastrointestinal and Endoscopic Surgeons.

Dr. Brandt is a regular contributor to surgical literature, authoring 54 abstracts, 39 peer-reviewed publications and 10 book chapters. He also has served as section editor of two books.

Dr. James Campbell joined MetroHealth in 1993 and has served in a number of key roles during his tenure. He has overseen the Post-Acute and Extended Care Patient Care Unit since 2009 as Executive Director and has served as Chair for the Department of Family Medicine from 1999 through 2010.

Dr. Campbell was instrumental in building a strong geriatrics program at MetroHealth and is board certified in Family Medicine and Geriatric Medicine.

Dr. Campbell received his medical degree from the University of Cincinnati College of Medicine and completed his internship, residency and fellowship programs at University Hospitals Health System in Cleveland. 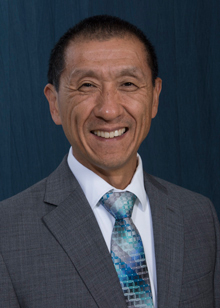 A faculty member at MetroHealth since 1994, Dr. Chae retains his role as Professor and Chair of Physical Medicine and Rehabilitation (PM&R) and Professor of Biomedical Engineering at Case Western Reserve University (CWRU) School of Medicine.

Dr. Chae has made notable contributions as a clinician, educator, inventor, scientist, and leader, developing the percutaneous peripheral nerve stimulation system, the only intervention with long-term treatment efficacy for chronic post-stroke shoulder pain. He has authored over 120 peer-reviewed publications, reviews, book chapters and books and has been awarded 13 patents. He is a member of the National Academy of Medicine and Past President of the Association of Academic Physiatrists.

Dr. Chae received his Bachelor of Science in Engineering from Duke University and a Masters in Engineering from Dartmouth College. He received his MD and residency training in PM&R from Rutgers University – New Jersey Medical School. He completed the NIH Rehabilitation Medicine Scientist Training Program Fellowship at CWRU. His clinical expertise is in stroke rehabilitation.

Dr. Crowe is a board-certified dermatologist specializing in general dermatology. He joined MetroHealth in 2011. He is a member of the Academy of Dermatology and of the American Medical Association.

Dr. Crowe received his medical degree from the University of Cincinnati College of Medicine, where he also completed his internship and residency programs.

Dr. Ronnie Fass joined MetroHealth in 2012 and is a world-renowned expert in the field of esophageal disorders and gastrointestinal motility. In addition to his role as Director of the Division of Gastroenterology and Hepatology, Dr. Fass is the head of the Esophageal and Swallowing Center at MetroHealth.

Dr. Robert Ferguson joined MetroHealth in 2007. He is an interventional neuro-radiologist who specializes in stroke prevention and treatment. He is an opinion leader in interventional neuroradiology and neurointerventional techniques and technologies. Dr. Ferguson has been Principal and Co-Principal Investigator in multiple clinical stroke trials. He also is active in basic and clinical research to limit the X-ray dose in a variety of imaging procedures to reduce the risk of radiation-related complications. Dr. Ferguson is certified by the Ohio State Medical Board. 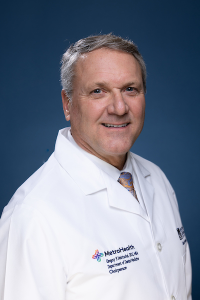 Dr. Gregory Heintschel joined MetroHealth in 2018 and serves as Chair of the Department of Dental Medicine.

As Chair, Dr. Heintschel is responsible for the successful recruitment and development of faculty to meet the clinical and academic needs of the department. He maintains excellent teaching programs for residents, fellows and dental students in close collaboration with the Case Western Reserve University (CWRU) School of Dental Medicine.

Dr. Heintschel was appointed as Senior Associate Dean for the MetroHealth Campus of the CWRU School of Dental Medicine in 2020. In this role, he oversees the planning, assessment and implementation of the school's teaching and research programs at the health system.

Dr. Heintschel earned his DDS from The Ohio State University and an Masters in Business Administration from Lawrence Technological University in Southfield, MI. He completed his residency at the University of Toledo (Ohio).

Dr. Ewald Horwath was appointed Chair of Psychiatry at MetroHealth in 2010. He has studied the genetic epidemiology of major depression and panic disorder; risk factors for major depression; epidemiology of anxiety disorders; the treatment of schizophrenia; and the diagnosis and treatment of mental disorders in patients with chronic diseases. He has a special interest in the treatment of patients with HIV infection and management of psychiatric care in diverse communities. He is board certified by the American Board of Psychiatry & Neurology.

Dr. Horwath has published 30 peer-reviewed articles, 21 book chapters and four reviews. In addition, Dr. Horwath has served as editor for the epidemiology section of the textbook Psychiatry and is a member of its editorial board.

Dr. Horwath received his medical degree from the University of Chicago-Pritzker School of Medicine and completed an internship at Overlook Hospital in New Jersey. He completed his residency at the Psychiatric Institute in New York, and a fellowship at the Columbia University College of Physicians and Surgeons, also in New York.

Dr. Agnes Loeffler joined MetroHealth in 2018 and serves as Chair of the Department of Pathology.

She earned her medical degree from the University of Illinois College of Medicine (Urbana). Dr. Loeffler completed her residency in Anatomic Pathology and a fellowship in Surgical Pathology at Dartmouth-Hitchcock Medical Center (New Hampshire). 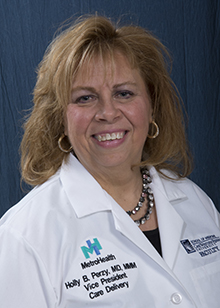 Dr. Holly Perzy joined MetroHealth in 1994 and established the first Medicine-Pediatrics (Med-Peds) practice at MetroHealth in the southwest Cleveland area and the first national “department” in 1996, setting an example for other Med-Peds programs in the US. She served as President of the medical staff from 2006 to 2008 and has held a variety of clinical and operational leadership roles. Most recently, Dr. Perzy served as Vice President, Care Delivery and Executive Director of Skyway, an integrated network of health care services.

Dr. Perzy earned her medical degree from the Case Western Reserve University School of Medicine, and a Masters’ in Medical Management from the Heinz School of Public Health and Policy at Carnegie Mellon University in Pittsburg. She completed her internship and residency training at MetroHealth, serving as Chief Resident in Internal Medicine.

Dr. Roitberg joined MetroHealth in 2017 as Chair of MetroHealth’s Department of Neurological Surgery, Director of the Brain, Spine and Pain Center and Professor at the Case Western Reserve University School of Medicine. Ben retains his role as Chair, in addition to the new Service Line leadership position.

Under Dr. Roitberg’s leadership, MetroHealth was among the first two hospitals in the nation to use next generation virtual reality technology. Dr. Roitberg was Chair of the Advisory Board of ImmersiveTouch Simulation and has worked with ImmersiveTouch since 2006 to develop simulations used for various procedures. Dr. Roitberg is a member of the World Federation of Neurosurgical Societies Spine Committee, and on the executive council of the Cleveland Brain Health Initiative, which links the work of local scientific and medical leaders in brain disease and disorder treatment. His research prominently includes outcomes of spine surgery.

Dr. Tejbir Sidhu joined MetroHealth in 1988 and serves as Chair of the Department of Anesthesiology. He is an Assistant Professor at Case Western Reserve University (CWRU) School of Medicine.

Dr. Sidhu earned his medical degree from the Christian Medical College in India. He completed an internship at the University of Maryland Medical System (Baltimore) and completed his residency training and fellowship in Anesthesiology from MetroHealth Medical Center.

The recipient of multiple best doctor and best surgeon awards, Dr. Wilber has been listed in Best Doctors in America consecutively from 1998 to 2014 and has won the Department of Orthopaedics Teaching award four times during his tenure.

Dr. Wilber has been published in 28 peer reviewed publications, has written 21 abstracts, and 11 book chapters. He has made more than 145 national and international presentations including multiple visiting professorships. Dr. Wilber was promoted to Professor of Orthopaedic Surgery at the Case School of Medicine in 2002 and was named the inaugural Hansjoerg Wyss Professor of Orthopaedic Traumatology in 2009.

Dr. Wilber earned his medical degree from Case Western Reserve University School of Medicine and completed his internship and residency in Orthopedics at Case University Hospitals/MetroHealth, followed by an AO fellowship in Orthopaedic Traumatology in Switzerland.